Compiled by Shilpa B.

Rāmāyan̩a, magnum opus of Hindu mythology, narrates the story of prince Rāma’s quest to rescue his wife Sīta from the clutches of ‘demon’ king Rāvan̩a. The story, popularly portrayed as the battle between ‘good’ and ‘evil’, embodies the Hindu idea of dharma—the duty of behaving according to one’s position and role in the society—and continues to exert a powerful influence on the religious, cultural, social, and political life of contemporary India. More than 300 versions of the Rāmāyan̩a exist all over the world, with myriad renditions and revisionist readings through diverse frames of re-thinking.

Śoorpan̩akha is the sister of Rāvan̩a and a minor character who appears in the epic. Śoorpan̩akha literally means ‘the one with sharp nails’ or ‘the one whose nails are winnowing fans’. Several versions of her story exist, but the following is based on Vālmīki’s version of the Rāmāyan̩a, written between the 4th and 5th century BC. Vālmīki depicts Śoorpan̩akha as a demon: dark and bony with long, sharp nails and claws, curved teeth, lock of hair like abundant spears, pot-bellied, with reddish eyes and big, foul-smelling mouth. A widowed Śoorpan̩akha meets Rāma when wandering in the forest, takes the form of an ‘alluring’ woman Lal̩ita, and expresses her desire to marry him. Rāma dismisses her proposition saying he is already married to Sīta, but recommends she approach Laks̩man̩a, Rāma’s brother. The brothers taunt and mock her in the guise of reciprocating her love. Filled with rage, Śoorpan̩akha tries to attack Sīta, which leads to Rāma and Laks̩man̩a chopping off Śoorpan̩akha’s nose and breasts.

A close reading of the epic reveals the binary opposition between the ‘demoness’ Śoorpan̩akha and the ‘chaste’ Sīta. In opposition to Sīta, who is seen as pure, modest, and obedient to her husband Rāma, Śoorpan̩akha is portrayed as a disgraceful, immodest, and unpleasant woman, devoid of all ‘feminine virtues’. Later counter-readings of the epic endeavour to humanise Śoorpan̩akha and reimagine her as an independent woman who makes her own choices, dares to express herself and her love, and asserts her identity regardless of her colour, gender, race, and ethnicity. These readings view Śoorpan̩akha as challenging traditional patriarchal notions of the place of a woman and how she is expected to conduct herself. Drawing from the theory of Aryan migration, a few such readings also view Rāma as an Aryan oppressor, and the people portrayed as Asurās [demons] as the Dravidians, the native inhabitants of the subcontinent. The Aryan invasion results in a war between the Aryans and the Dravidians leading to the subjugation of the latter and destruction of their clan, society and culture. 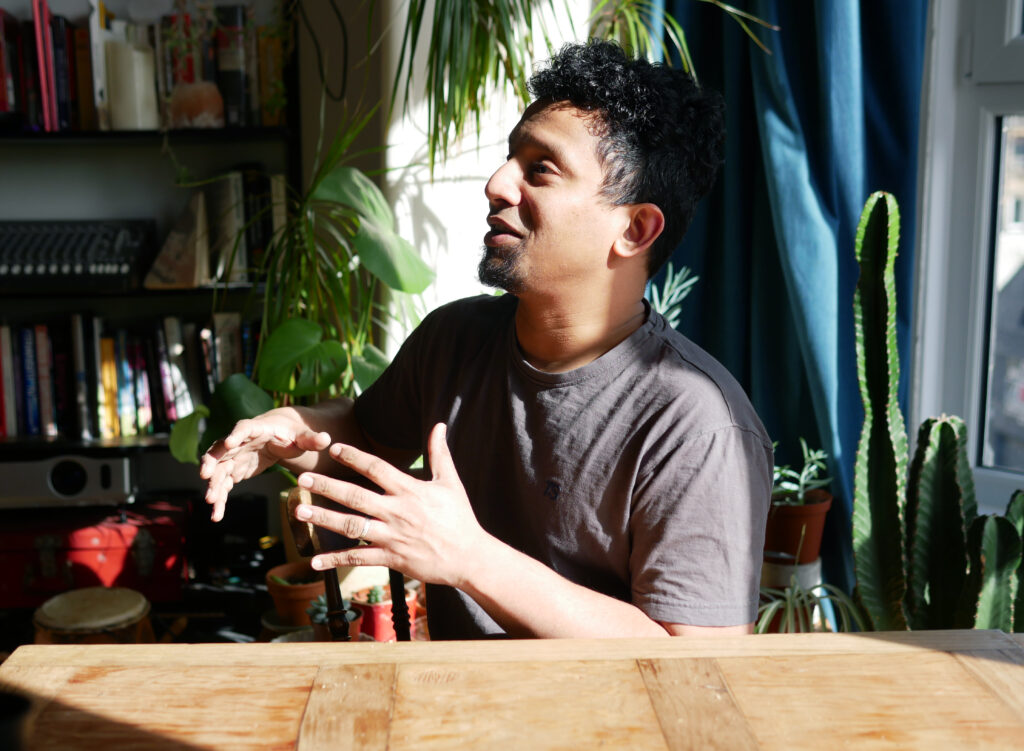 Nakul Krishnamurthy is an Indian artist who works with Indian Classical music and explores new ways of conceiving it at the intersection of Western Classical, experimental and electronic music traditions. Read more →